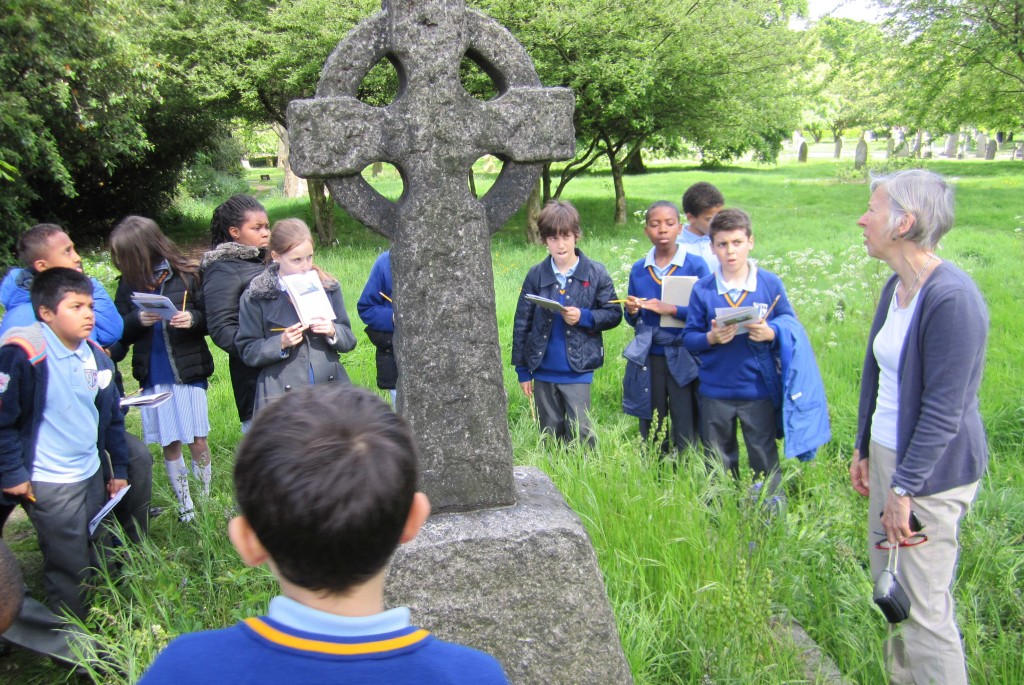 The Urban Studies Centre worked with Year 5 ‘Seals’ class from St Thomas of Canterbury Catholic Primary School on a Heritage Lottery Funded local history project to commemorate the centenary of World War One.

The children explored their local area to uncover some amazing secrets from the past in an active and lively local programme, with help and support from LB Hammersmith & Fulham Local Archives, Fulham Library, Hammersmith Community Gardens Association and Friends of Margravine Cemetery.

To enable the World War One project to be more widely shared by schools in other locations an education pack has been created, consisting of a series of lesson plans (with case studies) on local WW1 history, that can be used for Key Stages 2 and 3 and can be adapted to your local area. 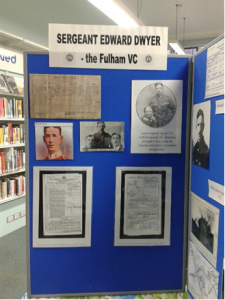 Debby Wale from Fulham Library, who showed us the plaque to commemorate our local hero Edward Dwyer VC, wrote about our visit in her blog…

As part of the commemoration of World War 1, a group of children from St Thomas’s School came to the library to attend a talk on Corporal Dwyer and see the plaque. It was lovely to see the class look through the illustrated London News and they asked lots of questions. Fulham Library have assembled a display on Edward Dwyer and World War 1. 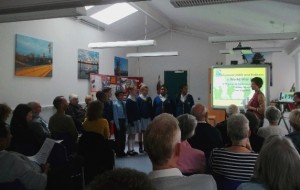 Seals class shared their WW1 performance and exhibition at our 2014 AGM, then wrote about it in their blog…

On Tuesday 23rd September, nine children were chosen by the Urban Studies Centre to attend their AGM. The children were asked to perform a short drama piece which retold the lives of people from our local area during World War One.

They also reminded the audience about Edward Dwyer, who was once a pupil at St Thomas of Canterbury and was the youngest person to receive the Victoria Cross for an act of bravery. Councillor Caroline Needham presented the children with a certificate for enthusiasm and hard work during the project. 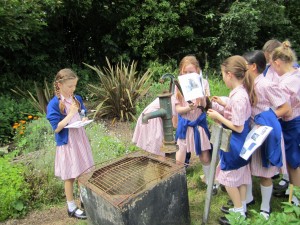 Year 5 and Year 6 pupils from Kensington Prep School joined us for a First World War explore of their surrounding area to discover how WW1 affected local people’s lives.

Our trail included stopping at Fulham Potteries where ceramic rum jars and hot water bottles were made and sent to troops all over the world during the War, and to see the war memorials at All Saints church, including the 25th London Cyclist Battalion memorial inside the church to the regiment who went uniquely on two wheels.

At Fulham Palace Meadow Allotments the girls tried their hand at drawing water up from the underground stream using the 100 year old pump. The allotments were established in 1916 on land given up by Bishop Winnington-Ingram, to help feed the people of Fulham during food shortages.
‘I found a lot out about Fulham that I had not known before. I had walked past and visited those places without realising their history!’ (Year 6 pupil Kensington Prep School) 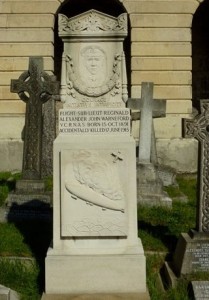 Fulham’s WW1 heritage really is spread far and wide, as we discovered taking our walkers exploring the lengths and breadths of Fulham for clues and stories from the Great War. Highlights of the walk were discovering the dramatic headstone of Reginald Warneford VC in Brompton Cemetery – the daredevil fighter pilot who at 23 was the first person to successfully shoot down a Zeppelin on a solo mission, but was tragically killed two weeks later – and finding out at Fulham Palace how it was turned into a hospital for shell-shocked soldiers during the War
‘It reall 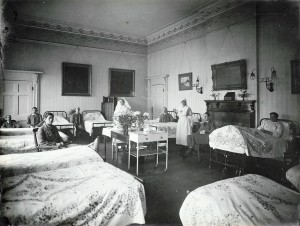 y made us step out and I was amazed about how many hidden gems there are on my local doorstep’ (Cass, WW1 walker) 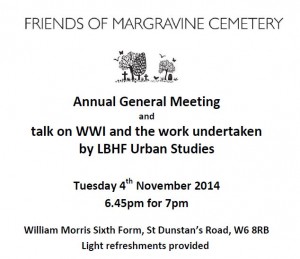 We were really pleased to go and speak about our WW1 project at the Friends of Margravine Cemetery’s AGM. The cemetery played a very important role in the project, not only as somewhere beautiful and local to St Thomas of Canterbury Primary School, but with particular interest in its war memorials.

The Friends were interested to hear how valuable it had been to visit the J. Lyons memorial, for enhancing the children’s understanding of the scale of the awful loss of life in the War. We were also able to share the story which the children actually created a project performance about, connected to the well hidden, little known ‘Blake’s memorial’ in the Margravine.

Ruth Savery from the Friends had met us at the Blake’s memorial to explain that it commemorates thirteen workers (most of them young women) from Blake’s munitions factory on Wood Lane where they worked making bombs and bullets to be sent to the Front. The workers were tragically killed in an explosion, just ten days before the end of the War. 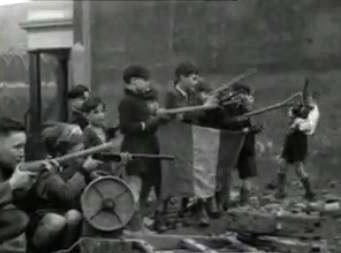 Year 6 children from St Augustine’s school joined us for a local trail searching for clues and stories about WW1 in the streets near to their school. Looking at an old local map, pupils wondered why the area looked different; for example what had happened to Lintaine Grove where local Victoria Cross hero Edward Dwyer had grown up? Our detective work led us to Normand Park which we learned had been built in the 1950s after the streets and houses were decimated by WW2 bombing raids. We played charades based on WW1 street games, and found some archive footage about how local children who had played on the bombsite helped create the park we know and love today.

‘..to put it into local context made it exciting, interesting and real for the children. They are very motivated now and keen to do some of their own research about the local area and the Wars’ (Miss Donnelly, Year 6 teacher)

This project was possible due to a First World War: then and now grant from the Heritage Lottery Fund.