Last half term children from Old Oak School took part in the Urban S.T.E.A.M project. The Year 6 bubble at Old Oak Primary were fortunate enough to take part. Immediately the children jumped into action and decided to go on a walk around their local area to 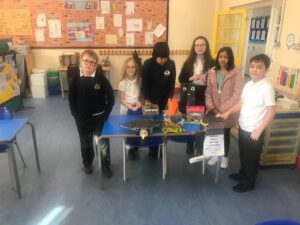 discover any problem areas they could resolve using design as a tool to solve the problems they found. Straight away the group realised a common theme. The amount of rubbish left on the streets around the school was astonishing. The group decided that this should be the basis of their design work.

There were other themes such as improving their environment and lots of dog mess around their school. The children were very aware of the fact that the amount of rubbish has increased. They thought this was mainly due to the fact that people now wear masks and often plastic gloves because of the current pandemic. The group all agreed even though there is an increase of essential products there is no excuse to leave rubbish on the floor. 7 discarded masks were found as they walked around the school! Walking on to the scrubs the group noticed the same issues. 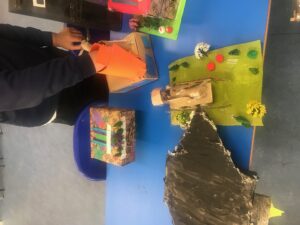 Dog mess, which Raffaella Yr6 explained to the groups is dangerous particularly for children.The overall agreement was to design different solutions to the ‘rubbish problem’ in East Acton.
We then looked at what designers do as jobs. All sectors were researched. As soon as the group investigated looked at car designers the Tesla rapidly began the subject of discussion. The group loved ideas and concepts around the Tesla which drifted into how to buy a part of Tesla so a brief discussion on stocks and shares ensued, quite a concept for these young minds!

Fast forward to the design workshops the group worked independently on ideas to answer the question “How do we reduce the amount of waste we see in our community?”

The group looked at different products we see in our everyday lives analysing what was already in existence, what products could be improved and was there space for next products designed by young designers for our current market. 4 weeks were spent on the design and making of the products. The children decided they wanted to make their project into a design competition in which they would present to each other with the winner crowned Old Oak’ Designer of the Year (a title they came up with themselves). 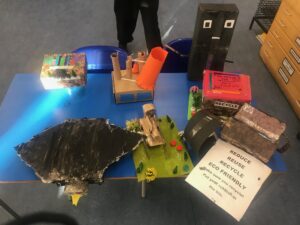 down the street of their nearest recycling bins and what you can recycle in particular bins on the street, the idea being that all bins in East Acton have different compartments to recycle rubbish. Oleja’s design also linked to the pavement and had a detector when people drop rubbish on the floor and gave a gentle reminder for residents to remember to put their rubbish in the bin!

Perhaps a bit ‘Big Brother is watching you’ but a winner as judged by her peers!
Lydia February 2021
Share
Prev project Next project